Just a Mere Farm operates on over 2500 acres of owned and rented land in DeWitt County, Illinois. The farm’s sustainability and success can be linked to its history. Conservation, willingness to embrace change, adaptation of technology and valued relationships with landowner partners have been keys to the growth and success of the farm for generations. 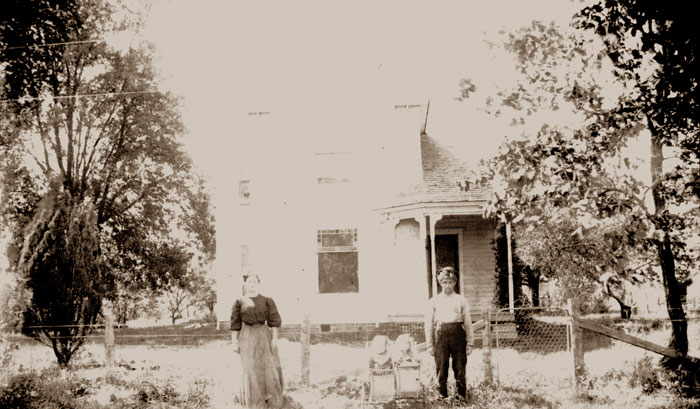 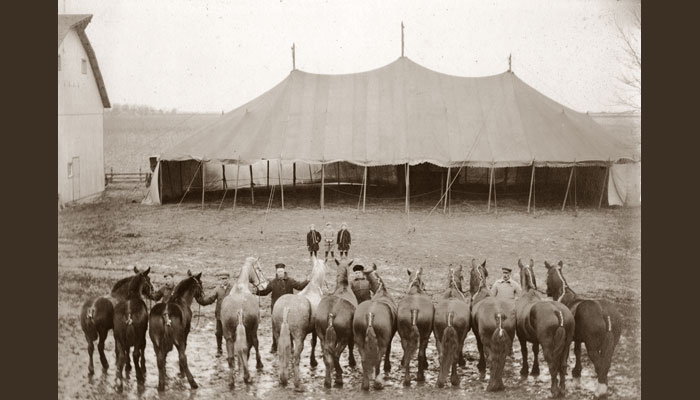 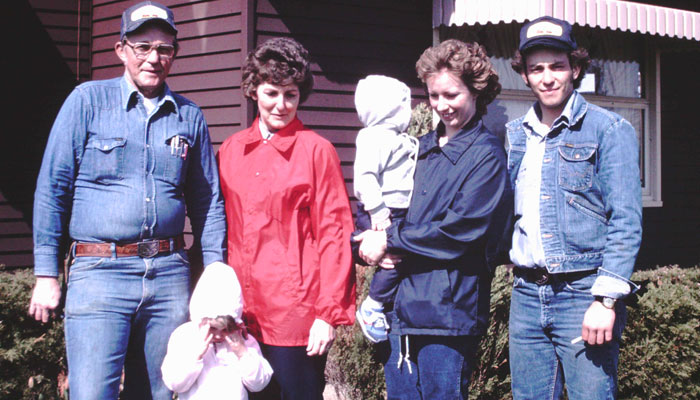 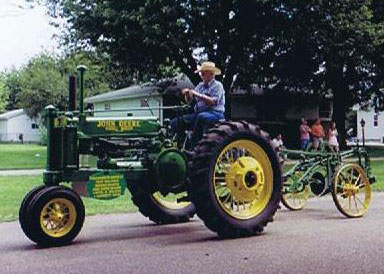 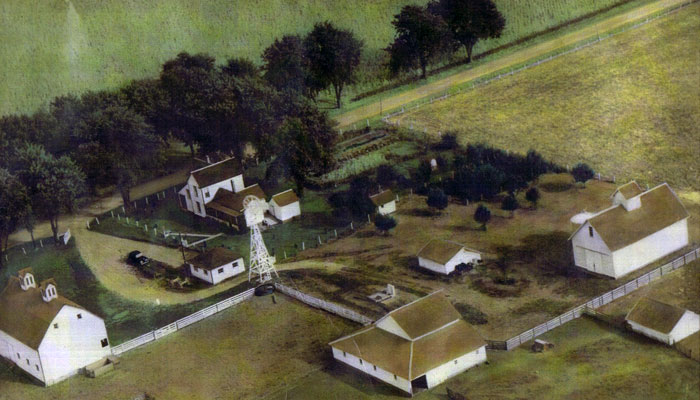 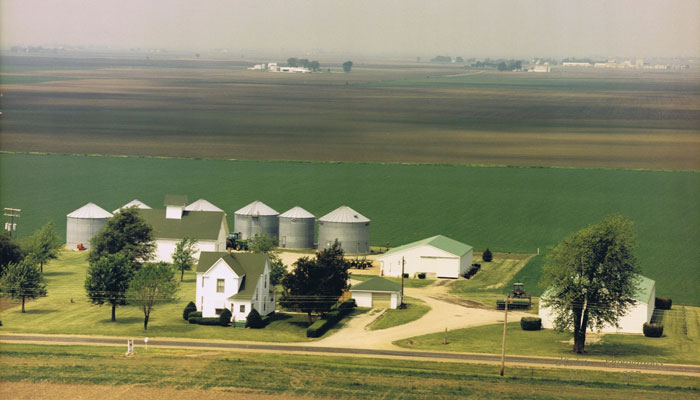 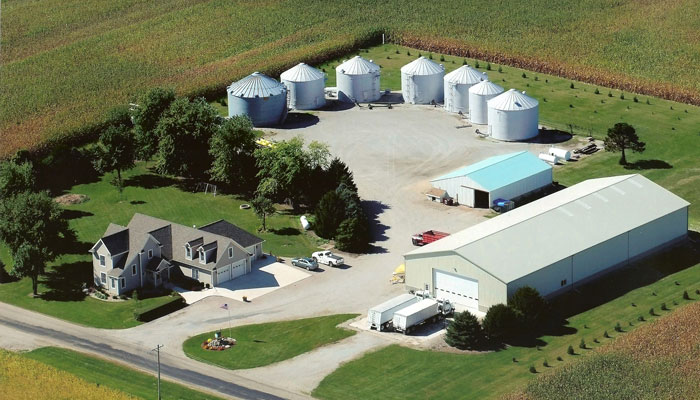 Rod and Debbie (Moore) Wilson were both products of DeWitt County farm families and are lifelong residents of the area. As most farm kids growing up, they were active in many farm activities like 4-H and FFA. They both attended high school in Clinton where Rod graduated in 1975 and Debbie in 1976. Rod attended Wyoming Technical Institute after high school and became a certified auto technician. He worked in Clinton as an auto tech full time until 1980 when he returned to the farm. After high school Debbie attended Richland Community College in Decatur. They married in 1977. Together they have two children, Sarah (Michael) Oldham and Ryan (Sarah) Wilson. More recently they have been blessed with three grandchildren. Sarah and Michael have two boys, Payton and Preston. Ryan and Sarah most recently added to the grandson troop with their son Reid.

Beyond the farm Debbie also has a full time position with the U.S. Postal Service serving as a rural carrier. Rodney serves as commissioner of the Coon Creek Drainage District, which encompasses much of the farm’s acreage. Both are active members of the First Christian Church in Clinton. When not working they can usually be found enjoying time with their growing family. Rodney also enjoys hunting, fishing and golf.

Brad grew up on a family farm near Ottawa, Illinois. Both 4-H and FFA were big parts of his life while growing up. He excelled with both crops and livestock projects. He was president of his FFA chapter, held a state degree, was awarded Star Section Farmer, and in 2002 he was one of 38 members recognized nationally as a FFA New Century Farmer. Brad attended Joliet Junior College and received an Associate’s Degree in Ag Production and Management. He then transferred to Illinois State University where he earned a Bachelor’s Degree in Ag Industry Management; his focus of study was agronomy. While in college Brad worked as an intern for Crop Tech Consulting. He is still employed part time by CTC and enjoys his involvement with the Farm Journal Corn College events, for which he has been speaking on agronomy topics since the event’s beginning in 2008. Brad met the Wilsons in 2003 during his internship with CTC and became part of the farm operation after graduating in the fall of 2006. Away from the farm his interests include hunting, shooting sports, motorcycles, and aviation.

The Wilson family began managing what is now known as Just a Mere Farm in 1936 when Ada (Rudasill) Williamson asked Byrl Wilson, a fifth generation farmer himself, to take over operation of her family’s farm.  This 187 acre farm is still today the current base of operations and location of the Wilson home.  It is also interesting to note that 1936 was also the first year that a tractor was used on the farm, a John Deere Model A purchased by Byrl and a neighbor.  The tractor is still owned by the Wilson family and can be seen on display in the DeWitt County Museum.

Byrl’s son Bob joined the operation in 1959. Livestock was an important part of the farming operation at this point and Bob managed both a swine and cattle herd.  He raised pure bred Angus cattle to finish; most were packaged locally and sold to DeWitt county residents.  By 1979 the farm had grown to nearly 1000 acres.  Bob was well known in the community, he held positions on several boards and committees locally.  He was also an active conservationist and a pioneer in no-tillage farming.  The no-till practices still embraced by the farm today trace back to Bob’s decision to further develop the concept in the late 1970s.  A seed dealership was also a big part of Bob’s contribution to the operation, which he continued after his retirement from farming.

In 1980 the farm grew again, to 1500 acres, and Bob’s son Rodney and daughter-in-law Debbie were able to enter the business as partners.  They continued the cattle feeding operation until 1984 before deciding to focus the farm’s business model around the crops, as it is today.  Debbie’s contributions have been focused around the financial management of the business.  Her financial guidance helped to ensure the business’s survival through the tough farm economy of the 1980s.  Rodney, like his father, is very active in conservation, utilizing no-till along with modern minimum and vertical tillage practices.  He is also an early adopter of technology, adopting the variable rate zone management system used by the farm to vary planting, side-dress nitrogen, dry fertilizer, and limestone rates.  The full implementation of this variable rate zone management concept, which began with zone limestone applications in the 1970s, was completed in 2008.

Brad Beutke joined the operation in the spring of 2007.  He grew up on a family farm near Ottawa, Illinois.  He met the Wilsons four years earlier while employed as a college intern with Crop Tech Consulting.  Brad currently splits his time between the farm and Crop Tech with hopes of farming full time in the future.  His experience in the consulting business lends to many of the farms advanced agronomic practices.

Currently Just a Mere Farm operates on over 2500 acres of owned and rented land in DeWitt County.  The farm’s sustainability and success can be linked to its history.  Conservation, willingness to embrace change, adaptation of technology and valued relationships with landowner partners have been keys to the growth and success of the farm for generations.